About the Implementation Plan

The creation of the implementation plan identifies timelines, resources and priorities to move forward with the action items identified in the UIS. Recognizing that we are still early in our journey towards reconciliation, the UIS’s implementation plan is intended to be a fluid document that will be updated on a regular basis as we move forward with additional action items and continue to engage the Indigenous community in further conversations. 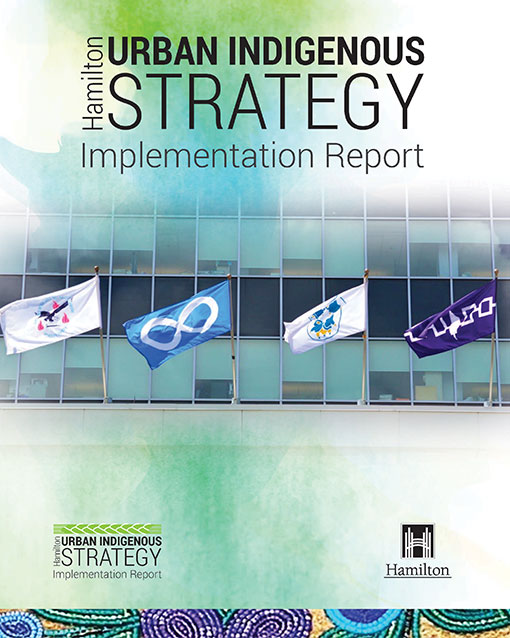 In the spring of 2015, Hamilton City Council committed to developing and strengthening the City of Hamilton’s relationship with the Indigenous community through the development of an Urban Indigenous Strategy (previously referred to as an Aboriginal Justice Strategy).

The City’s Urban Indigenous Strategy (UIS) team focused on developing a strategy which was endorsed by City Council in July 2019. The UIS identifies actions and charts out a path to reconciliation that aims to strengthen the City’s relationship with the Indigenous community.

The strategy is intended to demonstrate respect for Indigenous knowledge by promoting a better understanding among all residents about Indigenous histories, cultures, experiences, and contributions. It focuses on the alignment of key initiatives and strategies that support the Truth and Reconciliation Commission’s Calls to Action and the Missing and Murdered Indigenous Women and Girls Calls to Justice.

The UIS plan consists of 40 actions that were identified based on consultations with the Indigenous community. The 40 action items are grouped into three strategic themes (Land, Spirit, and People) creating a pathway towards the importance of collaboration and awareness which measures commitment through continued consultation and accountability. The success of this strategy is dependent on the engagement of staff across the corporation and involvement by all City departments.

About acknowledging and respecting the spiritual, mental, physical and emotional connections that Indigenous peoples have to land

Embodies how Indigenous contributions and experiences are honoured and commemorated in the City.

As the City of Hamilton verges in ways to work collaboratively, six work groups were created that will help define details necessary to reach the action items of the UIS. The work groups consist of UIS team, the City of Hamilton leadership and staff, and community agencies working together with Indigenous and non-Indigenous residents. As we focus on the implementation plan priorities, our focus is to keep the Elders, Knowledge Keepers, and the Indigenous community’s recommendations for the strategy at the forefront knowing they are all equally important. It is about the Indigenous communities and what we need to do together towards reconciliation.

The following work groups prioritized for 2021 and 2022

As we formulate the framework, the focus is to support internal efforts across the Corporation to strengthen relationships with the Indigenous community and treaty territories. This process will establish high-level guidance to build more specific and sustainable deliverables creating meaningful efforts towards matters of historical, traditional and cultural significance in ways of knowing municipal planning and decision-making.

Each phase will coordinate flexibility and innovation towards a process of reconciliation creating strategic alignments.