For information about the project

The City of Hamilton has completed a Public Art process to commission a permanent public art work to be sited in Century Street Parkette at the corner of Wentworth and Wilson Streets in Downtown Hamilton, Ward 3.

The volunteer citizen jury has selected the work “Convergence” by Hooman Mehdizadehjafari(PDF, 669.68 KB) as the winning proposal. Installation is anticipated for the summer of 2022. 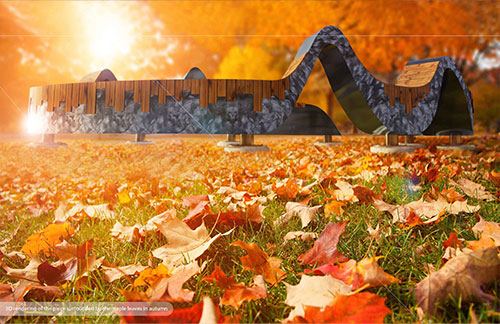 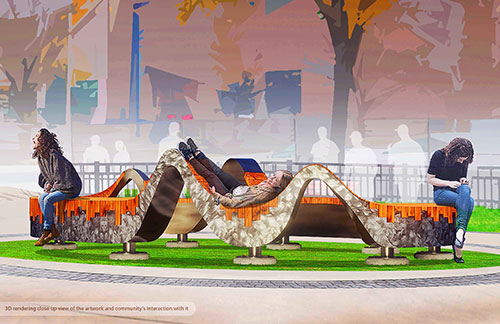 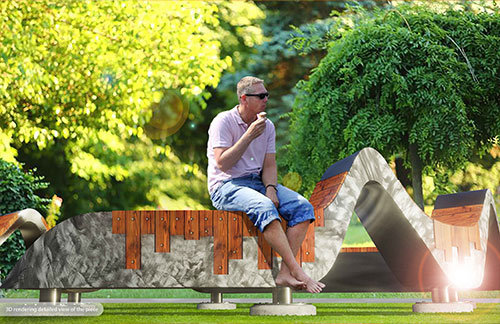 If the GALA Neighbourhood is anything, it is a community in motion. In fact, it has always been this way. From the traditional custodians of the land that arrived to enjoy the bounty of the merging waterways to the more recent settlers that brought on a flourishing industrial revolution. Change appears to be woven into the DNA of these lands.

Emerging from a cultural melting pot of hard working and entrepreneurial Makers and Craftspeople that came from across the country and the world to build bright futures for their families, is a community ready to transform once again.

Choosing to honour the story of their past, wearing proudly the remnants of a city ripe for constant evolution and growth - resilient even in the toughest of times - energized community members have asked for an artwork that represents this very spirit that is the fuel that propels them into a bright future.

The proposed design is an abstract art bench in an expressive form that moves along the outer borders of the central oval area of the Century Street Parkette (current planting bed). The dynamic form of the piece is a metaphoric testament to the community's affinity for evolution, a constant, energetic wave that moves to its own unique rhythm, and in continued forward motion even as it weathers the inevitable ups and downs.

The stainless steel material reflects the industrial spirit of the GALA Neighbourhood's history with the scratch-sanded texture of outer wall describing the fingerprints left behind by the determined hands that built this proud community.

The wooden sitting areas on the other hand, represent the beautiful local nature through the use of a natural substance. Beyond a bench, this multi-use design activates the space by enticing conversation and gathering. The oval shape allows for both intimate inwards circles to form, as well as inviting varied seating and interaction opportunities for visitors of all ages.

This artwork, titled "Convergence", reflects the dynamic form of both skylines and the vibrations of its people - the heartbeat of the GALA Neighbourhood. In an educational context, Convergence represents the coming together of ideas and expertise from multidisciplinary backgrounds in order to achieve a common goal for the betterment of the larger community.

Nestled between downtown and the nearby hills, the central location of the site is where community members and their paths meet. Knowing the nature of the artwork site and its proximity to two schools in the neighbourhood, I couldn't think of a more noble way to inspire the future leaders of the GALA Neighbourhood than by providing a captivating opportunity for them to gather. For beyond the classroom, it is in the moments of sharing stories, dreams, and experiences not found in books where these young minds learn. Expanding from the culturally rich perspectives of the people that make up this colourful neighbourhood.

Convergence offers students/residents a place for performance, outdoor learning, and inspiration as it expresses the spirit of "rolling on" and moving forward

This report is an overview of the discussion and decision of the volunteer citizen jury that met on the evening of Thursday Sept 2nd, 2021 to determine which of the five short-listed artists’ proposals should be implemented. They reviewed the submissions in terms of technical issues, artistic excellence, response to context, public consultation results and the proposals’ response to the following competition goal:

Goal: That the proposed Public Art work(s) be an inclusive work that may be a functional or interactive piece(s) that reflect the proud local history and human stories of the GALA neighbourhood.

The jury also reviewed submissions for how successfully they addressed one or more of the following themes identified by local residents and business owners:

The jury members applauded the efforts of all of the 40 artists that made submissions to the competition. There were many excellent proposals. The jury extended their thanks to all of the artists that shared their ideas by submitting to this competition, especially the five shortlisted artists whose proposals were presented for public comment.

The jury also shared their appreciation for all 202 people that took the time to review the short-listed submissions, select their preferred proposal and provide comments. There were nearly 14 pages of comments submitted which included many excellent ones related to the project goal and themes, which helped to inform the jury’s decision. Moreover, the public consultation offered important insight into public reaction to all of the proposals. While there was enthusiastic support for each of the five proposals, the prevailing preference was for Convergence by Hooman Mehdizadehjafari. The many perceptive comments in support of this proposal influenced the jury in making their decision to award this proposal the highest score.

Jury comments on each proposal are as follows:

Convergence by Artist: Hooman Mehdizadehjafari
The jury found the work to be interactive and playful with the opportunity to support multiple uses. The work was celebrated for its potential to serve multi-generational uses, from students meeting, to family and community groups of all ages interacting with the art. The materials and shape of the work were seen to integrate in a natural way, with composite wood draping as water dripping over the side of the metal base. The arrangement of the piece centers the human form to shift and be in many postures due to the undulating nature of the bench. The work feels modern and clean while also reflecting the evolving nature of the community. While the piece was noted as not being the most colourful and eye catching; the natural movement and flow, the use of natural materials, the extra seating drawing people to the center of the site and interactive potential of the piece moved the work to receive the highest overall score.

Cascading Waterfall by Artist: Opus Art Projects Inc.
The proposal was applauded by the jury as an important depiction of Hamilton as ‘waterfall capital’, with the piece acting as a strong testament to the importance of water to the development of culture in Hamilton on a regional scale. From our location in the heart of the great lakes region to the natural wetlands found here and the importance of waterfalls to drive mills in early industry, water has shaped our City’s culture. The work was celebrated as connecting well to natural resources due to the proposed materials. The piece was seen to offer a natural respite to urban life, ie: being surrounded by traffic. The work offers the feeling of being on a nature trail with the sun shining through the piece with dynamic potential. However, there were concerns that work did not reflect the themes related to the local neighbourhood as well as other proposals. There were also minor technical concerns about the material’s graffiti resistance the possibility of garbage collecting between the screens. This proposal therefore scored lower.

Bond by Artist: Wynn Walters
The jury was impressed by this clean and simple, classically beautiful sculptural work and agreed that the ‘helping hand’ helps to build a conversation about community. However, the work was not seen to be as interactive as some of the others. They questioned its ablity to draw the community, especially youth, to use the space in different ways and therefor felt that it did not address the project goals and themes as successfully as some of the other proposals

Tangle by Artist(s): Coryn Kempster and Julia Jamrozik
The jury enjoyed the fun, colourful, futuristic, abstract work presented in this proposal. The proposed trees were seen as a very welcome addition to the community. The work was seen as inviting and playful, beyond modern, with good potential for interaction and varied experience in the park. Although the jury found this to be an excellent art work, melding form and function, they did not see the work as clearly teaching about the neighbourhood or speaking to a message about the local community. The large scale of the piece was also seen to reduce the usable green space of the small park. It was also noted that some may see the name as carrying negative connotations. Overall the piece makes a strong, colourful, visual impact as a work of art but it was scored slightly lower than others.

Home Works by Artist: Studio Huizenga
This proposal impressed the jury with its bold vision and the dedication to celebrate the local architectural style of the historic neighbourhood. Form and function came together well in the proposal and the colour, lighting and seating were seen as welcome additions to the community. However the jury felt that, while not intended by the artist, the work could be seen by many to connotate the negative aspects of the affordability crisis currently affecting the neighbourhood by elevating and idealizing the “house” form. Given this, and that the work did not receive a large amount of public support, the jury scored the work lower.

Advisors to the Jury

The survey has now closed. Thank you to everyone who participated. Review Century Street Parkette public consulatation survey results(PDF, 339.74 KB).

The call for artists closed on January 28, 2021.  40 total submissions were received from national and international artists and artist-led teams and 5 submissions have been selected by a citizen jury to prepare detailed proposals for public consultation.

A series of virtual focus group discussions were held with community stakeholders, artists and subject matter experts through the months of May and June, 2020.  While the focus group discussion is typically conducted as one group meeting held in person, separate discussions took place for this focus group due to physical distancing requirements during the Covid-19 pandemic.  The focus group developed the Project Goal and themes that artists will be asked to address in Public Art submissions to this competition.