To report issues or to request new:

To increase roadway safety, Hamilton is one of the participating municipalities to implement Automated Speed Enforcement (ASE) technology in designated school and community safety zones.

ASE is an automated system that uses a camera and a speed measurement device to enforce speed limits. The ASE tool, when used in collaboration with other methods such as engineering, education and enforcement is used to help improve road user safety by increasing speed compliance, altering driver behaviour and increasing public awareness about the critical need to slow down in designated school zones and community safety zones.

Automated Speed Enforcement is proven to effectively enforce speed limits, increase driver awareness and decrease injuries and fatalities as a result of motor vehicle collisions in other Canadian provinces and countries around the world.

What is Automated Speed Enforcement (ASE)?

ASE, also referred to as an automated system that uses a camera and a speed measurement device to enforce speed limits, is a speed enforcement tool that uses technology to help make roads safer for all road users. An ASE system captures and records images of vehicles travelling in excess of the posted speed limit in school zones and community safety zones with tickets issued to the registered plate holder regardless of who was driving. This will result in a monetary fine, but no demerit points will be applied.

On September, 20th 2021, Council directed staff to initiate a full time automated speed enforcement program to be used in designated school zones and community safety zones through the City of Hamilton. The program supports the City of Hamilton Vision Zero Action Plan and the principles of Vision Zero to reduce speeds and overall injuries as a result of motor vehicle collisions.

The City has activated its Automated Speed Enforcement (ASE) cameras and began issuing tickets to speeding drivers since October 1, 2020.

The Highway Traffic Act only authorizes the use of ASE in school zones and community safety zones.

A school zone is an area of road in close proximity to a school. School zones are designated by by-law passed by municipal councils as described in the Highway Traffic Act. Typically, school zones have reduced speed limits that are put into effect, either by time of day or 24/7, within 150 metres in front of a school.

ASE is one of many speed enforcement methods that is used, along with engineering activities, education initiatives and police enforcement, to increase safety in areas with vulnerable populations such as school zones and community safety zones.

In May 2017, Ontario’s Highway Traffic Act was amended to introduce the use of ASE in municipalities to address ongoing issues with speeding in school zones and community safety zones.

Each municipality in Ontario is determining, based on the needs of its community, whether to implement ASE. Many municipalities are moving ahead with this new speed enforcement tool because they have identified it is an efficient and effective tool to help reduce speed in school zones and community safety zones.

Operating speeds within school zones are typically lower than other road segments, however, the risks are much higher. Speeding around schools puts the lives of our most vulnerable people at unnecessary risk and ASE is designed to slow drivers down and keep our neighbourhoods safe.

While traditional enforcement will still be used, ASE is a complementary method that enables police officers to focus on other critical and time-sensitive tasks. Through ASE, incidents of speeding can be detected on an ongoing and consistent basis, ensuring that school children and other road users always feel safe, not just during traffic blitzes. Using ASE consistently also lends to altering driver behaviour for ongoing road safety.

ASE is about safety and transparency and clear signage will be posted within each school zone and community safety zone where a system is in place and active. There will also be signs installed prior to the issuance of tickets to let motorists know that these systems will be installed in the near future.

No. As speed limits are not guidelines – they are the law – there is no need to disclose threshold speeds. Driving at the posted limit will ensure a ticket is not issued.

ASE is just as accurate at detecting speed as traditional speed measurement devices used by police.

The Dynamic Speed Signs contain a radar device and an LED display. The radar measures the speeds of oncoming vehicles and the LED sign displays their speeds to the passing motorists. The unit functions as an educational tool for residents and motorists to raise awareness about motor vehicle speeds. The equipment is for information purposes only and does not issue speeding tickets.

Purpose of the Dynamic Speed Signs 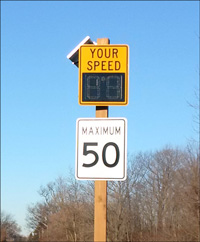 Dynamic Speed Signs have been introduced to the City of Hamilton as part of a safety initiative to reduce vehicle speed. The operating speed electronically displayed is a strong visual reminder to the motorist to comply with the posted speed limit.

The signs have been tested and are to within +/- 4 km/h of the displayed speed, so there may be some differences between what the sign and your spedometer display. Traffic Engineering still uses Automatic Traffic Counters on the road for accurate measures of speed and volume when needed.

The Red Light Camera program is designed to:

Running red lights is illegal. It is unsafe for motorists to enter an intersection after the signal light has turned red.

Experience suggests that the program improves road safety as evidenced by a decrease in fatal and injury collisions across the six participating municipalities.

Red light cameras do not replace police officers; they complement police efforts. The cameras are set so that only vehicles that enter an intersection after the light turns red are photographed. Vehicles that enter on green or amber lights are not photographed. Motorists already in an intersection when the signal changes to red (waiting to turn) are not red light runners.

If the red light camera is flashing and taking photos while the light is green, technicians are checking the camera hardware and changing the film. Tickets are not issued for vehicles going through on a green light.

The City of Hamilton installs and operates red light cameras, but tickets are processed by the Joint Processing Centre (City of Toronto).

What information you need to provide:

To report damaged or missing signs on school property, contact the appropriate school board:

To report a damaged or missing police bait sign:

To request new traffic signs, pavement markings, crosswalks, speed limit changes and other traffic safety improvements, you will need to:

What information you need to provide:

Report repair and maintenance needed on the Sherman Access by calling 905-546-2489 and identify:

Full traffic signals are traditional green-amber-red displays for all directions of approaching traffic. Full signals are usually installed when intersections have delays and back-ups under two-way or all-way stops, often due to too much traffic.

The City‘s decision to install a full traffic signal control at an intersection is based on the current Ontario warrant outlined in Ontario Traffic Manual Book 12 (OTM Book 12) published by the Province of Ontario. Under this warrant, a traffic control signal would be technically supported if one of the following five following reasons is fulfilled:

Staff regularly access the need for left-turn phasing at traffic signals based on this criteria:

Detection used throughout the City of Hamilton

What is the difference between a Red Light and a Vehicle Detection Camera?

Currently the City of Hamilton has over 100 signalized intersections under computer control at our Traffic Management Centre, located at 1375 Upper Ottawa Street.

The Traffic Management Centre communicates to our traffic signals using 5.8 GHz radio technology installed at the intersections which use point-to-multipoint communication. The radio technology utilizes standard TCP/IP Ethernet protocols. Not only do we communicate to our traffic signals using this medium, we also receive live video feed from our peripheral devices. The City of Hamilton will also be installing fibre during major road construction. 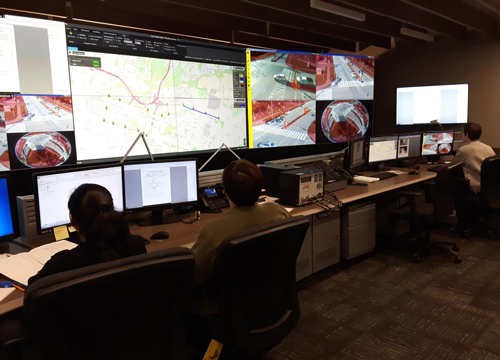 For traffic signal timing information and traffic engineering technical drawings, you will need to:

Submit completed form and fee by:

Pay the required fee. You can pay by cash or cheque (made payable to the City of Hamilton) when you submit your application or you may choose to be invoiced.

For any traffic counts, please visit our mapping tool (MS2) for all currently available studies.

For any location we have a count, there will be a signal or icon that when you click on it, a 24hr volume will display as a popup

Turning Movement Counts
(at intersections, signal icon, or circle on the map).

Example: Totalling the two directions on the street you are looking at will give you the 24hr volume on that street alone. 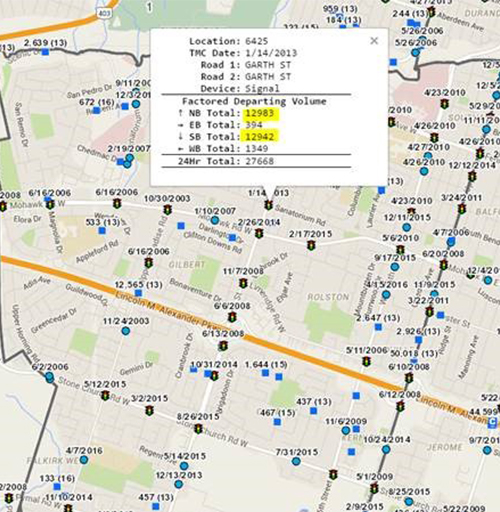 Mid blocks
(at locations between two intersections, square on the map).

Example: the popup illustrates the 24 volume in the popup labelled as ‘Count’