Why are Safe Speeds important?

Excess and inappropriate speed is responsible for a high percentage of injuries and fatalities resulting from road collisions. Controlling vehicle speed can prevent collisions happening and can reduce the impact when they do occur by giving people more time to stop, lessening the likelihood of a collision and reducing the severity of injuries.

Designating a stretch of roadway as a Community Safety Zone allows for the doubling of fines associated with speeding and is meant to influence slower speeds and improve safety in certain sections of road where public safety is of special concern.

Community Safety Zone signs signal to motorists travelling within the zone that under the Highway Traffic Act, fines for speeding or related offenses are doubled.

Rules of the road do not change within the designated zones, but the penalties for violations are significantly increased. 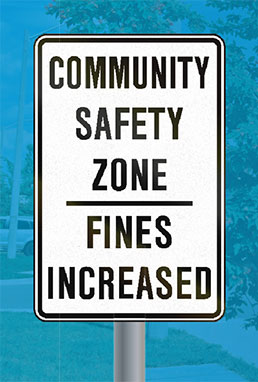 The selection of Community Safety Zones across Hamilton were determined based on the number of safety and speeding complaints, locations with higher numbers of vulnerable populations such as seniors and children, and areas with higher numbers of previous violations. For a full list of Community Safety Zone locations, visit the City’s Vision Zero Dashboard.

In June 1998, the Province of Ontario passed Bill 26 to promote public safety through the creation of Community Safety Zones. The bill, and its regulatory changes, are targeted at improving road safety in Ontario.

Under section 214.1 of the Highway Traffic Act, "The Council of a municipality may by by-law designate a part of a highway under its jurisdiction as a Community Safety Zone if, in the Council's opinion, public safety is of special concern on that part of a highway."

Lawn signs asking drivers to slow down are available to residents of Hamilton. These signs promote safer streets and remind drivers to reduce their speed in residential areas.

The signs are not enforceable by Hamilton Police Services, however, enforcement of the legal posted speed limit is. The safety of all road users is a priority for the City.

The signs can be erected year round. However,  the April to November timeframe is recommended to maximize visibility and minimize weather impact on the signs so they can be reused.

How to get your sign? Each household is eligible to receive one free sign. You can pick up your signs at any of our Municipal Service Centres. 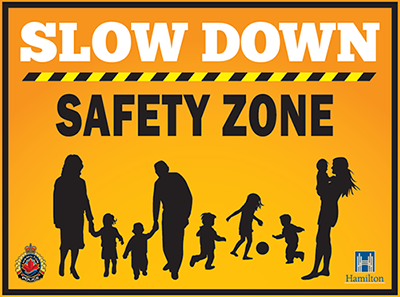