The report supports Council’s vision for Hamilton, which aims to: 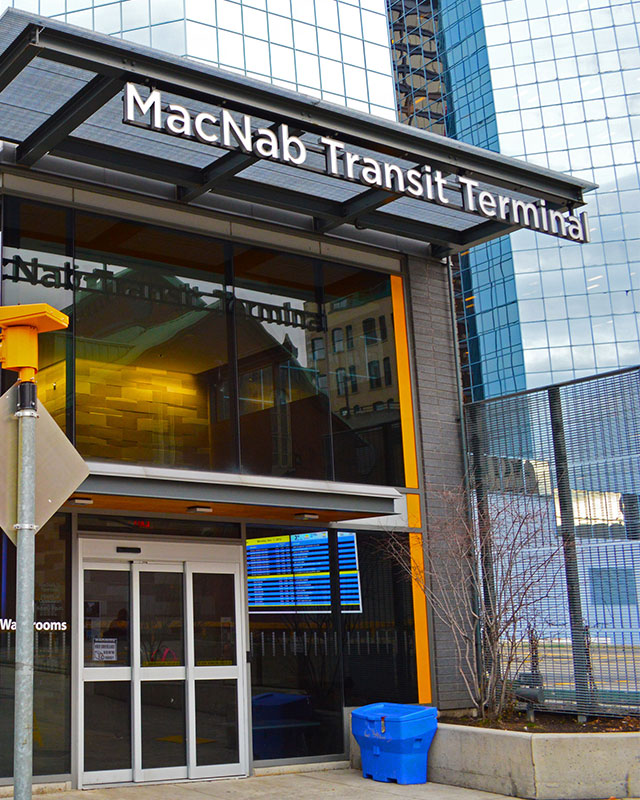 Structuring the transit network around rapid transit corridors, increasing transit service, and improving the customer experience are essential to build ridership in anticipation of rapid transit and to position transit as a competitive mobility choice.

The first key contributor to becoming Rapid Ready in Hamilton is to invest in improving transit services and reconfigure the transit network in anticipation of rapid transit. These early investments would increase ridership, elevate the role of public transit in Hamilton, and prepare customers for rapid transit implementation.

Increasing municipal investment in transit service to build ridership will demonstrate that Hamilton is serious about public transit as a competitive travel choice.

In addition to investing in more service hours, transit can become Rapid Ready by reconfiguring the network to prepare for rapid transit service, by reorienting existing transit services to feed planned rapid transit corridors to establish travel patterns in advance of implementation. Taking a proactive approach to network changes, in conjunction with engagement of impacted communities, will help customers and residents understand, influence, and champion improvements to the transit network.

Finally, getting Rapid Ready means elevating of the role of public transit in Hamilton – making transit a competitive mobility choice that is central to the city’s communities. Currently, there are strong perceptions of public transit in Hamilton as not a choice, but a service relegated only to those who cannot drive. Changing this perception, through a combination of improved service, an enhanced customer experience, marketing, and branding are key to reposition transit as a viable and attractive choice. Giving transit greater priority on streets, making it faster and more reliable, will reinforce transit’s role in keeping Hamilton moving.

Transit-supportive land use and densities set within well designed communities are important elements of rapid transit implementation. Planning how the city will grow and around rapid transit is necessary and engaging impacted neighbourhoods to shape this growth is essential.

A second key element for getting Hamilton Rapid Ready is to continue the citywide discussion of how the city should grow around transit and rapid transit. Over the past several years, this has included discussions on building forms, heights, densities, mixed-uses, heritage preservation, public space, and community services, among many others. Tough decisions will be necessary to protect stable urban neighbourhoods and identify opportunities for intensification and redevelopment – particularly at planned key nodes of planned rapid transit lines.

Using a mix of tools, such as the city’s Official Plan, zoning bylaws, corridor studies, secondary plans, and urban design guidelines, Hamilton can shape land uses around the future rapid transit corridor. Much of this work has begun, such as the completion of the city’s Urban Official Plan, the Transit Oriented Development Guidelines, and the Main King Queenston Corridor Strategy Study. These and other studies (such as existing downtown and Business Improvement Area (BIA) development incentives) explore incentives to encourage redevelopment and intensification at designated locations, while community benefit frameworks could ensure that benefits from new development and rapid transit are distributed on a wider scale.

Engaging communities early and continuing the conversation on how rapid transit corridors should evolve and change are essential to integrating rapid transit with our neighbourhoods and future development.

Developing the land use-planning framework along the rapid transit corridor would have major benefits, the greatest of which is the building of community support and buy-in for a renewed vision and plan. Also important is the environment of certainty it provides for developers and property owners, reducing the level of risk and barriers for development.

With careful guidance and inclusive community engagement, Hamilton’s rapid transit corridors can evolve to become vibrant, transit-supportive, and rapid ready communities with safe and active linkages to and from rapid transit and throughout communities.

Rapid transit will serve as the main transit spines in the city; however, it is just one aspect of expanded mobility choice. Integrating more travel options will maximize the impact of rapid transit and make it easier to get around the city.

A third component is to develop a multi-modal transportation system in Hamilton with connections to rapid transit by other modes, including park and ride, walking, cycling, and local and inter-regional transit. An essential first step is to change the way city departments interact and make decisions around transportation. This starts with reorganizing city departments around mobility management and developing working groups to tackle pressing and long-term multi-modal integration issues. This will allow rapid transit, when implemented, to integrate easily into the modal mix in the city.

Improving pedestrian environments in advance of rapid transit is essential. This means closing gaps in sidewalks and pedestrian linkages from transit stops to adjacent communities and destinations, calming traffic to increase safety, and improving pedestrian amenities and streetscapes to make a more pleasant walking environment. Creating barrier-free and accessible pedestrian environments will be a priority to respond to the mobility needs of an ageing population. Cycling can also play a major role for mediumdistance travel. It can also extend the catchment of rapid transit and bridge the “last-mile” gap by providing reliable access to final destinations. Providing safe cycling routes coupled with secure bike parking, are two keys to encourage cycling to transit. In addition, public bike share transit systems provide public fee-for-use bicycles to efficiently transport riders to major transit nodes.

It is recognized that a majority of trips in Hamilton will continue to be by car. However, from a rapid transit perspective, there are actions and strategies that can be taken in advance to promote the shift of travel from car to transit and other modes, such as developing park-and-ride facilities and allowing high-occupancy vehicle access to transit-only lanes. This could encourage changes in travel behaviour which could be a precursor to transit use. The key to these policies is to phase autorelated strategies in concert with improved transit services and implementation of rapid transit.

Multi-modal integration also looks at the role of regional and intercity transit, which in Hamilton’s context, is important for linkages throughout the Greater Golden Horseshoe, and beyond. As the western gateway to the Greater Toronto and Hamilton Area, home of the second largest airport in the region, and active port and at the junction of major rail and road corridors, rapid transit will play a role in providing connections between and access to these linkages. Advancing plans for multi-modal transit hubs and mobility hubs to create seamless connections between local, rapid, and interregional transportation services is a major priority.