The City of Hamilton has completed a Public Art process to commission permanent public art works to be located along a new path in the western section of Churchill Park, also known as the Royal Botanical Gardens Teaching Garden.

The volunteer citizen jury has selected the work "be:longings" by Gary Barwin, Simon Frank and Tor Lukasik-Foss as the winning proposal. Read the Churchill Park Public Art Jury Report (PDF, 368 KB) for details of the discussion.

Installation is expected in the fall of 2019, pending the completion of the new pathway. 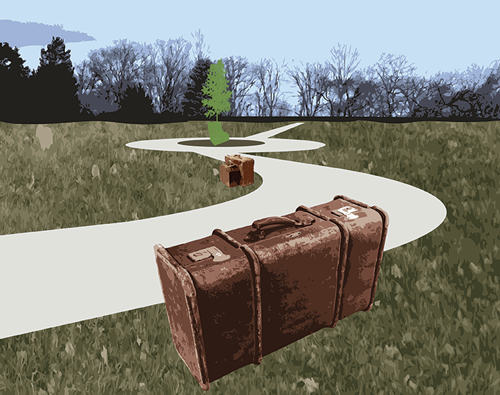 You walk along a path. A suitcase rests nearby. You take a closer look and discover that it’s made of bronze. It looks like there’s a rip in the side, and through it you can see rocks inside the case. It’s intriguing. You keep walking. More suitcases are along the path ahead. Each of them has something natural, something elemental inside. Whose belongings are they? Are they what has been carried, what one must bring with - both history and hope? Where have these people come from? Where are they going? Where do they belong? Is this a path of travel, escape, becoming?

In the central garden area there is a bench. On one side, someone has set down a briefcase. It, too, is bronze. What is inside? Where did the person go? Did they hide or disappear? In the centre of the garden, a living tree grows out of another bronze suitcase. The case is open. It has sheltered and protected the tree, enabled it to take root, and grow free. On the other side of the garden, there are more suitcases along the path. Others have travelled, others will converge here. Others will take root, will grow free.

be:longings is comprised of a series of ten bronze-cast suitcases situated in different locations along the length of the new Churchill Park pathway. The suitcases are various sizes and styles, and on each, there is a different kind of small—a patched rip, a broken clasp, a bursting seam—revealing natural materials contained inside each case. Some of the cases have luggage tags or labels, which are embossed or engraved with symbolic imagery and text. These detailed elements on the suitcases engage viewers in up-close and tactile interactions with the artwork, as they examine the individual pieces. The suitcases lead viewers along the path to the culminating element of the artwork: a living tree emerging out of an open suitcase in the central garden.

The suitcases refer to concepts of travel, escape, refugees, emigration, the writing, language and administration of laws and rights (e.g. Raoul Wallenberg granting passports which enabled Jews to escape.) The elemental materials in the cases, each vital to the existence of both humanity and the natural world, relate to the weight or gravity of human history and experience and our connectedness to the circumstance of place. The tree represents strength, hope, and the overcoming obstacles, as it pushes through that which contains, obstructs, and controls its capacity to thrive.

be:longings is a thoughtful interactive sculpture that leads the public along a path inspired by the actions of Raoul Wallenberg, yet reflective of universal principles of human rights. Its accessible message invites participation, as viewers consider what human rights are, and how—despite the trials of history and the vicissitudes of oppression—humanity and its ideals are ultimately hopeful, inextinguishable, and irrepressible.

This report is an overview of the discussion and decision of the volunteer citizen jury that met on the evening of Wednesday April 17, 2019 to determine which of the six short-listed artists’ proposals for a permanent public art work(s) (to be located along a new path in the western section of Churchill Park, also known as the Royal Botanical Gardens Teaching Garden) should be implemented.

They reviewed the submissions in terms of technical issues, artistic excellence, response to context, public consultation results and the proposals’ response to the following competition goal:

That the proposed Public Art work(s) be a hopeful Interactive piece inspired by the actions and legacy of Raoul Wallenberg and reflective of the universal principles of Human Rights, inviting those who engage with it to embark on a journey of self-awareness to investigate how they can act in their own lives against injustice and in support of our common humanity.

The jury members applauded the efforts of all 44 artists and artist-led teams that made submissions to the competition and extended their thanks to all of the artists that shared their ideas by submitting to this competition, particularly the six short-listed artists whose proposals were presented for public comment.

The jury also shared their appreciation for the 166 people that took the time to review the short-listed submissions, select their preferred proposal and provide comments. This feedback offered important insight into how the public might respond to all the proposals.

In light of the complex thematic context of this Public Art project, the jury were impressed by the depth of understanding shared by those who offered feedback. The jury saw artistic merit in each of the six proposals and the perceptive comments in support of the be:longings proposal influenced the jury in making their decision to award this proposal the highest score.

Jury comments on each proposal are as follows:

be:longings, Artists: Gary Barwin, Simon Frank and Tor Lukasik-Foss
The jury enjoyed that be:longings doesn’t immediately reveal its message and could therefore be re-visited by neighbourhood park users, revealing itself over time and inviting ongoing reflection. They felt that this proposal most effectively met the project Goal of interactivity as the viewer will be inspired to investigate each piece as they journey along the pathway. The jury observed that the proposal speaks to themes of universal migration and would therefore appeal to a broad range of people. Additionally, they noted that be:longings evokes the piles of suitcases found at Auschwitz, thereby drawing a connection to the legacy of Raoul Wallenberg. The jury appreciated the site-specificity of this proposal, noting that the lower profile of the suitcases is appropriate to a neighbourhood park. They also found that the work is responsive to the nearby forest and natural character of the area in its inclusion of natural materials and a tree growing from a suitcase. They additionally noted that this symbolism inspires hope. While the symbolic character of this proposal was appealing to the jury, they noted that the luggage tags provide an opportunity for some interpretation that draws a link to the project Goal; having a writer on the Artist team was seen as an asset to including text that supports this connection.

Edge of the Woods, Artist: David M. General
The jury found Edge of the Woods to be very strong artistically and well suited to the site in its organic forms and materials. They appreciated the interweaving of Indigenous reconciliation and Human Rights themes through the lens of empathy and felt that it would be powerful to have an Indigenous work on Indigenous lands. They noted that this proposal is forwardlooking, asking the visitor to reflect on what tools we have available to assist us in moving ahead; some found it uniquely hopeful in this sense (thereby addressing an aspect of the project Goal). While the jury was overall very positive about this proposal, they expressed uncertainty about the potentially triggering carved words in the granite work, as there are many schools and pre-schools in the area and subsequently, neighbourhood children that use the park. They felt that Edge of the Woods is a beautiful and powerful proposal but it may be best suited to another context.

Still I Rise, Artist: James Cameron Smith
The jury appreciated the symbolism of the doves that feature prominently in Still I Rise – a universal sign of peace and freedom, as well as an important Indigenous symbol. They felt that it strongly evokes a sense of casting off shackles and becoming something different - becoming free. They also felt that this piece would be seen from a distance and draw the visitor towards it. However, the jury expressed a preference for the lower scale pieces as more appropriate for a neighbourhood park. The jury also suggested that this proposal may not be as specifically responsive to the site on a thematic level as some of the other proposals. Finally, they were concerned that the symbolism of birds in cages and birds escaping was too singular in meaning and may not encourage a nuanced personal journey as effectively as some of the other proposed works.

Courage Against Injustice, Artist: Ted Fullerton
The jury felt that Courage Against Injustice is uniquely impactful in that park visitors would be able the absorb the UN Human Rights declarations via the seven plinths proposed. In this sense, they felt that this proposal addressed the project Goal most directly. Also, as the proposal with the tallest feature, the jury felt that the piece would be a beacon to visitors at a distance. However, they expressed concern that some visitors may not see themselves in the nuclear family depicted in the proposal and that some visitors (e.g. those with mobility devices) may not be able to pass through the archway. The jury also felt that the architectural forms in the piece (limestone wall and plinths) may be seen by some as having an institutional and imperial feel that would not be welcoming to visitors to the site. The jury appreciated the strength and clarity of the proposal’s response to the project Goal, however they wondered whether it would engender an evolving and transformative experience on the part of the visitor as effectively as some of the other proposals.

Tribute, Artist: Brandon Vickerd
The jury noted the highly skilled artistry and compelling physicality of Tribute. They enjoyed that this proposal cleverly plays with meanings assigned to traditional sculpture and monuments. However, due to the sensitive and complex themes inherent in the project Goal, the jury expressed concerns about a monumental and (potentially) male figure. They wondered whether some marginalized groups may find an elevated figure disturbing in the project’s context. While they lauded the artist’s sophisticated conceptual approach, they felt that in execution there may not be enough of a perceivable connection to the project theme.

Each and Every One, Artist: Xiaojing Yan
The jurors agreed that the proposal successfully addresses themes of immigration and is powerful in recalling the Jewish people saved by Raoul Wallenberg in material form. They felt that the thousands of glass balls featured in Each and Every One would be beautiful in the park, however the jury expressed concern that the other materials and forms may not be in harmony with the natural context as they are hard and cool rather than organic. The jury was particularly worried that the obelisk had funerary and imperial connotations and may therefore be at odds with the project Goal. They felt that while the materials and forms may be stunning in a different context, this proposal did not reflect the natural context of the site as well as some of the other proposals.

The public were invited to review 6 short listed proposals and to provide comments during consultation online, at the City of Hamilton website and Hamilton Public Library Westdale Branch from March 15 to April 8, 2019. Thank you to the 166 people who have provided their comments on this complex project. Public consultation ended April 8th 2019. The comments will be reviewed by the volunteer citizen jury and considered along with artistic excellence criteria and technical concerns in their determination of the winning proposal.

The Call for Artists closed on November 22, 2018. The City of Hamilton received 44 submissions and would like to thank the artists who made proposals to this competition.  The jury will meet shortly to consider the submissions and shortlisted proposals will be posted for public consultation in Winter 2019.

A focus group was held with community stakeholders, artists and subject matter experts on July 30, 2018.