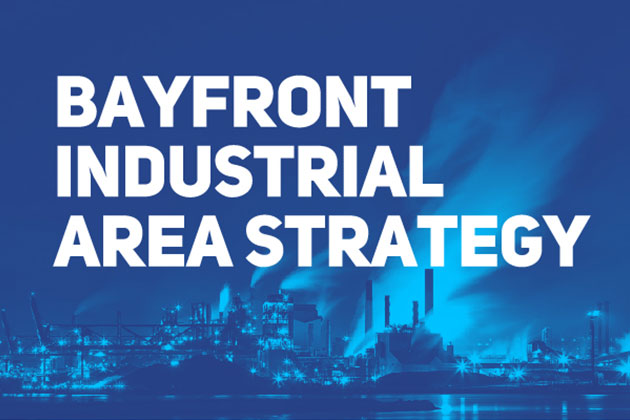 The City of Hamilton’s Bayfront Industrial Area (the "Bayfront") is a 1,607-hectare mixed industrial area on the shore of Hamilton Harbour and adjacent to some of the city’s oldest neighbourhoods.

The Bayfront has been part of Hamilton’s industrial, economic and cultural legacy for decades, and it was here where Hamilton grew its reputation as one of Canada’s major manufacturing centres.

Today, manufacturing is still very much a part of this area; however, the City is conducting a study to guide future improvements, investments and redevelopment.

The Bayfront Strategy will contain short, medium and long-term visions and actions to position Hamilton’s oldest industrial area for a future of continuing productivity and investment. 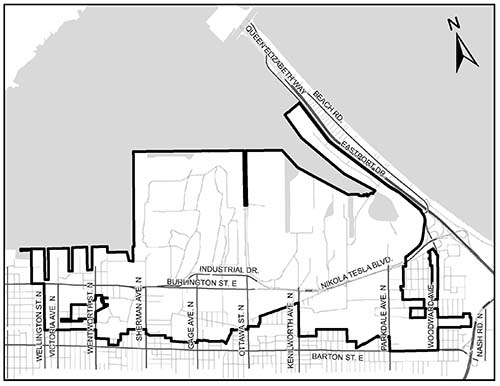 Phases of the Study

The Bayfront Strategy will be completed in phases:

Phase 1: Completion of a Background and Marketing Opportunities Study associated with the Bayfront in late 2015. The report identified a series of opportunities and constraints related to the future direction of the Bayfront. It concluded that this land is best suited to remain as an industrial area in both the short and medium term, with the potential to change land use in the very long term. Phase 1 Report(PDF, 1.51 MB)

Phase 2: Developed a long-term strategy and action plan to ensure the efficient use of land, encourage growth and investment, and improve the environmental conditions and image of the area. In addition, develop Urban Design Guidelines as a companion document to shape the development in the area to align with strategy and action plan.

Phase 3: Implementation of the actions as outlined in Phase 2 (Fall 2022 and ongoing).

The Bayfront is Hamilton’s largest industrial area and a major revitalization opportunity. It is generally located between Hamilton Harbour to the north, Barton Street to the south, Wellington Street to the west, and Woodward Avenue to the east.

The Bayfront is designated as Employment Area in Schedule E of the Urban Hamilton Official Plan (PDF) and its role is to contribute to the expanded economic role of the City of Hamilton.

This area is an economically productive manufacturing and steel hub. It is home to major steel producers as well as to Canada’s largest Great Lakes Port, a significant multimodal transportation hub that provides users with direct marine, rail and road connections. The dominant land uses in this area are medium and heavy industry, transportation and utilities.

Though the Bayfront is primarily intended for industrial uses, there is a large number of existing residential dwellings within and surrounding the study area.

With the changes in the steel industry and in the manufacturing landscape, the Bayfront represents a significant City-building opportunity within the broader Hamilton and Greater Toronto Area.

Through a citywide public dialogue, the engagement and communications process for the Bayfront Industrial Area Strategy will contribute to the establishment of a short, medium and long-term vision for the bayfront that has a high degree of community and stakeholders support.

A group comprised of representatives from neighbourhood associations, non-profit organizations, and other engaged stakeholders.

Focus Group Meeting #1
Held May 23, 2017
Introduced the project, discussed issues, opportunities and constraints for the area and provided input on a vision for strengthening the Bayfront Industrial Area. Meeting minutes(PDF, 786.65 KB)

As this is a long-term strategy, it will be youth who will actually see the change of this area and vision come to fruition. We wanted their feedback to ensure that youth have a voice in shaping the future of the Bayfront Industrial Area Strategy, to obtain insights from a youth perspective, to identify youth issues and concerns, to build capacity and enhance collaboration with youth.

Visit engage.hamilton.ca/bayfront-youth to view the engagement and summary report.

PEDTalks: Creating Hamilton's Industrial Bayfront
Held May 1, 2017
Keynote speakers, Nancy B. Bouchier and Ken Cruikshank, along with city staff introduced the comprehensive work that the City has undertaken to guide future improvements, investments and redevelopment of this important employment area.

By Phone or Email