SURVEY RESULTS -  A mail-out survey was distributed to households in Hamilton in late June/early July 2021 to ask for opinions about how the City of Hamilton should grow to the year 2051. A total of 18,387 survey responses were submitted to the City through mail and email up to the survey deadline of July 23, 2021. Thank you for your participation!

Public Comments & Details of the Survey

Summary Report
About the Survey

The City is planning for a significant amount of growth over the next 30 years to the year 2051.The Province of Ontario provides the growth forecasts that the City must plan for:

Through the update to the City’s growth strategy, known as GRIDS 2 and the Municipal Comprehensive Review (MCR), the City must determine if all this forecasted growth can be planned within the existing urban boundary through intensification and redevelopment, or if an expansion to the urban boundary is required to plan for a portion of this growth in new greenfield communities. 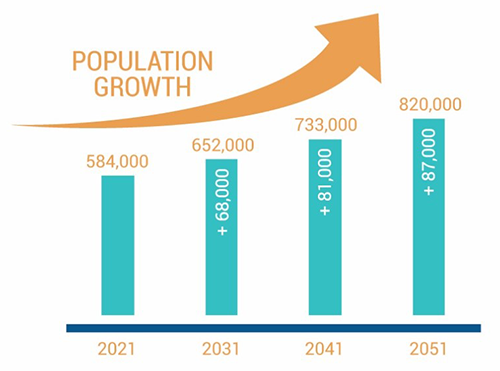 Key Question: Should the City of Hamilton expand its urban boundary to plan for new housing and job growth to the year 2051 on lands that are currently rural, or should the City plan for more intensification and redevelopment in the existing urban area?

Why did the City send out this Survey?

In March 2021, staff presented the results of the City’s Land Needs Assessment to 2051 to the General Issues Committee.Staff recommended that the City adopt the Ambitious Density scenario, as identified in the Land Needs Assessment, which would require the City to expand its urban boundary by approximately 1,340 ha to accommodate population growth to the year 2051. More details on the Ambitious Density Scenario. Staff did not make any recommendations on where the urban boundary should be expanded. That evaluation would take place through a future phase of GRIDS 2/MCR.

To ensure that all residents of the City of Hamilton have an opportunity to voice an opinion on the important questions related to planning for growth to the year 2051, Council directed staff to undertake additional public consultation on the question of urban boundary expansion, through a mail-out survey to each household in Hamilton.

In March 2021, Council provided this direction to staff:

“That staff be directed to conduct a city-wide mail consultation with a survey on the Land Needs Assessment and the Municipal Comprehensive Review that includes the Ambitious Density Scenario, a “no boundary expansion” scenario, and that also allows residents to submit their own alternative scenario…”

How was the Survey Conducted?